It’s All Happening At The Zoo

Zoo’s tend to be a favorite tourist destination around the world. Occasionally they get a bad rap. Yes of course there are places where the enclosures are too small or a terrible  accident occurs, like the time when the child fell into the gorilla pit at the Cincinnati zoo.  Those incidents, although not typical, usually are followed by a barrage of press. What’s rarely talked about is all of the good work they do and the difference they can make in saving endangered animals and ecosystems.

According to conservationist James Borrell there are nearly 40 species in peril on the planet. “These are species that would have vanished totally were it not for captive populations around the world, many of which reside in zoos,” he says. “For me, this is the single most important role zoos can play.”

Educating children about the importance of protecting all species on the planet, photographer and writer Michael George has released a book called Life At The Zoo: The Secret World of Your Favorite Animals (Sterling Children’s Books). The National Geographic veteran traveled to eight zoo’s around the world to capture what life is like behind the scenes for the animals and their keepers.

The internet went crazy over a  video he released of a keeper bottle feeding baby manatees who were rescued by SeaWorld after a hurricane.  It quickly garnered over 20 million hits.  A native of Florida where the affable ocean dwellers are most often found, George frankly admits that the manatees hold a special place in his heart.

“I think they are adorable and I just love them,” he laughs. “But when I think of natural selection, I wonder how this animal survived so long. It has zero defense mechanisms and its a wonder they exist.

George chilling out with a gang of penguins

SeaWorld is just one of many tourist destinations that has made it a priority to save the animals they are educating the public about. It has rescued something in the neighborhood of 33,000 animals and financially supported other organizations who work on animal rescue and rehabilitation, conservation education, habitat protection, and species research. Millions of dollars also go to coral reef restoration and  preventing coastal erosion among other initiatives.

Michael George says there’s a definite difference in photographing an animal in captivity verses out in the world with a long lens.

“The biggest challenge  is that animals know their daily routines and zoo keepers so well that any slight change can throw them off,” he explains. “So much of this was an exercise in endless patience. I needed a photograph of a giraffe interacting with his trainer for example but my he wasn’t used to me, so it took like two hours for him to realize I wasn’t a threat and come close enough to take the picture.

‘There’s a perception that there is a lot of human interaction  for animals at a zoo, but when you are in the enclosure you feel very separate from that human world.  The animals  are aware of what’s in the enclosure and what’s behind the glass.  That’s why a zookeeper develops a familial relationship with an animal and are often with them for years and years.”

He says there were some heart stopping moments, like when he was surrounded by 14 curious elephants at a zoo in Germany who were inspecting him very closely with their trunks.

“It was nerve-wracking at first but then you realize it’s  just an incredible experience,” he says. “I think a lot of people don’t understand what goes on behind the scenes at a zoo.  I learned so much myself.  I always thought of them as a great place to be educated but I didn’t realize all the other things that go on.”

George has begun to work on a new LGBT portrait project while continuing to visit schools to talk about Life At The Zoo. 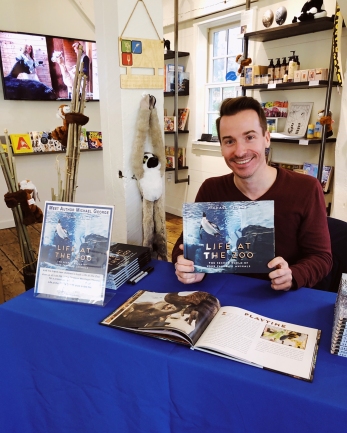 “My dream is that in 10 or 15 years I get an email from someone saying I read your book as a kid and now I am working with animals.  That would be amazing.”